The second RWOT Virtual Salon, Out of the Box 2052, gave participants the opportunity to talk about their most optimistic dreams of the future of identity and the internet. Rebooting Web of Trust ran a similar exercise in 2016 and it helped to inform our work for the next five years. As we return to physical events this September, we hope that this event will do the same.

Unlike our first salon, this one was heavily focused on break-out exercises in groups of two to three. We did not produce a single group statement, but instead shared a score visions of what the future could bring.

Our main break-out topics were:

Our main group topic was:

The following graphic captures the major topics and thoughts of the salon: 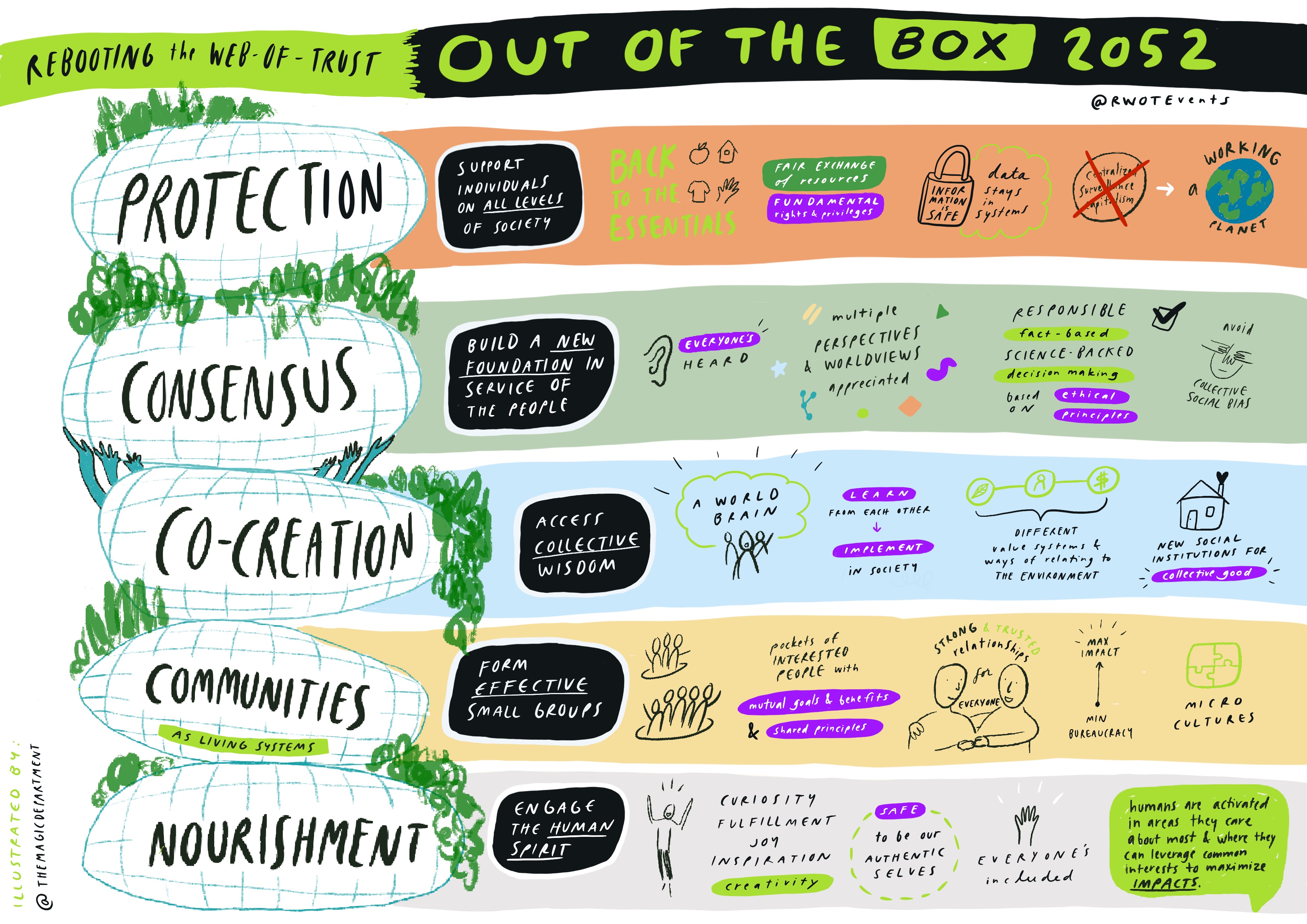 Following our icebreaker on pandemic shifts, we led off with a discussion of objects and how they symbolized identity to us. These objects included a musical keyboard, a phone, interlocked keychains, a COVID mask, a proximity NFC tag, a NAS drive, a yearbook, a DID generator, a mug with coffee, a student ID card, a book of traps, two lego characters, a passport and certificate of vaccination, an Estonia e-residency card, a Tibetan endless knot necklace that was an heirloom, a picture, a plant, a fuzzy microphone protector, a phone with QR code for vaccination proof, and didymium glasses.

The heart of our salon focused on “absurdly optimistic” dreams of the future that may influence the future of identity.

Some of us imagined specific advances such as …

Others of us imagined a whole new world …

We also discussed challenges that were more varied, sometimes moving outside of the digital space. They included:

Many insightful things were said during the salon, especially in our “Social Dreaming Matrix”, our main discussion of our absurdly optimistic dreams. This captures some of them. Some quotes might be slightly polished to be more readable.

“How Do We Avoid Collective Bias?”

“We need to ensure that everyone is being heard.”

“We don’t have to have one massive monoculture. Nature is resilient because it’s made of a whole bunch of interlocking tiny little heterogeneous cultures. You can’t grow a forest just by planting a ton of trees. There is research into planting thirty or forty varieties of trees and shrubs that work together.”

“How do we nourish the human spirit? We need to get everyone on the planet fully online and engaged with something that’s inspiring to them.”

“What if everyone could do something that brought them joy and fulfillment?”

“Humanity is full of examples of groups that seek to wipe out any mention of something.”

“There used to be knowledge horizons, where information only spread as far as people decided to spread it.”

“There’s nothing more dangerous than a number that’s easy to measure and almost useful.”

“The ultimate metric we fetishize is money.”

“Nothing in Facebook is private. The Zuck can see all, and that’s very dangerous.”

“What if everyone got paid to do something good for the planet?”

“I think key to this is trusting the data you put into these systems will stay there.”

“That idea that H.G. Wells had of the World Brain, where we can all become smarter by collecting our knowledge and working together on goals … I think that’s the lost promise of the internet.”

“We need to build a new foundation that’s in service of the individuals, to decentralize power, not simply to change the architectural model for its own end.”

“We actually have the technology now to form collections of humans that are like nations, but are delineated not by geography, but by shared principles and goals.”

Questions about the Salon

RWOT is Rebooting the Web of Trust. We held nine in-person design workshops from 2015-2019. Our goal was to produce actual work product at the workshops, which has resulted in the production of over 50 white papers on the future of identity of the internet, including incubation of the DID standard. We’ve also produced a few code libraries and demonstrations.

The next workshop is tentatively scheduled this September in The Hague. This was our second virtual salon in the interim.

What is a Virtual Salon?

A virtual salon is a meeting of interested people to discuss a topic. In keeping with the work focus of RWOT, our goal is to drive each salon toward producing output, in this case individual and optimistic dreams of the future.

How Many People Attended?

We had approximately 25 participants and a facilitation team of about a half-dozen.

Our participants were worldwide. In the US, we had participants from California to New York, from Hawaii to Puerto Rico. Worldwide, participants also came from Canada, Finland, Germany, Italy, Mexico, and the UK

How Did You Run Your Virtual Salon?

We used Zoom for our conversations, with ample use of randomly assigned 2-3 person breakout rooms to support smaller discussions where everyone could have a say.

What Were the Guidelines for the Conversations?

All conversation was protected by the Chatham House Rules: